What next for the housing market in 2021?

According to government figures, March 2021 was the busiest month for residential property transactions in at least 15 years. Furthermore, in April 2021, the Nationwide UK House Price Index registered its biggest monthly gain since 2004, while a similar index by Halifax recorded an annual rise of 8.2%.

Against the backdrop of a global pandemic, questions are understandably being asked about how long this period of robust activity can continue, and what will happen when it ends?

To answer these questions, we need to look at the reasons behind the current boom in the UK property market. 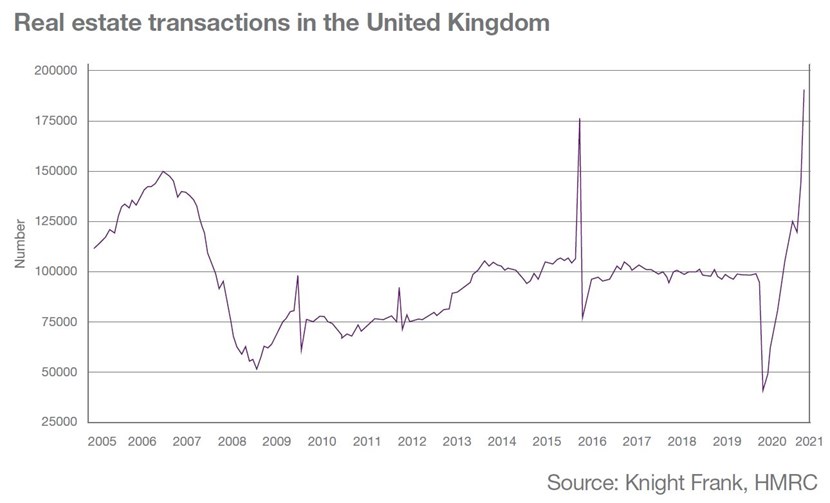 Why is the property market so strong?

The pandemic has distorted normal patterns of activity in the housing market. Prices have been distorted by a lack of supply. The number of new properties listed for sale in England and Wales was 15% lower in March 2021, compared with the same month in 2020, OnTheMarket data shows.

We didn’t see the customary post-Christmas bounce in property listings in the UK in early 2021. Instead, rising uncertainty over new COVID-19 variants, the logistical constraints of home schooling, and an expectation that the March stamp duty deadline would be missed, all contributed to a slowdown in supply. The number of houses available for sale in England and Wales fell 33% in the 12 months to March 2021, while the number of flats was 7% higher.

The slowdown was also more acute in parts of the country that have experienced stronger demand due to successive lockdowns. The number of house listings fell 3% in London, compared with 42% in southwest England.

When demand escalated sharply in March 2021, supported by the original deadline for the stamp duty holiday at the end of the month, the best properties sold very quickly. As the shelves emptied, sellers hesitated because they were unable to find anywhere to move into themselves, exacerbating the supply shortage and putting upwards pressure on prices.

Underlining how competitive the market has become, the average number of days between listing and going under offer fell by a third in the first few months of 2021, compared with 2020.

Will the market correct itself?

One reason to believe the supply/demand imbalance will correct itself is the rising number of market valuation appraisals. Appraisals take place when owners want to know the market price of their property before listing and they are a good indicator of supply.

Significantly, the end of both the stamp duty holiday and the government furlough scheme should also produce a tempering effect without causing a sharp correction. Based on the change in the number of properties going under offer between March 2020 and March 2021, it appears that higher rates of furlough did not lead to lower levels of housing market activity. Furthermore, expectations for unemployment have become more positive in recent months, with unemployment now expected to peak below 6%. When the pandemic began, the rate of unemployment was just under 4% – a figure that labour economists consider to be real zero.

The stamp duty holiday tapered away from the end of June 2021. Yet, there is no evidence that it has boosted activity to a significant extent in the sub-£500,000 property market, where the impact of the holiday is greatest.

Where are people buying properties?

In the first six months after the market re-opened in May 2020, the biggest jump in the number of properties placed under offer was in north Devon. In contrast, in the six months to March 2021, the biggest jump was in the London borough of Brent, OnTheMarket data shows.

While the initial desire among house hunters to be more rural has slowed down, it has not disappeared. Demand remains high for good properties in rural or semi-rural locations. At the same time, it was always premature to say there would be a longer-term shift away from London, reversing centuries of urbanisation, and that is proving to be the case.

In March 2021, the number of transactions in prime central London was the highest in five years. The introduction of a 2% stamp duty surcharge for overseas buyers from 1 April 2021 will have contributed to that activity, but travel restrictions also prevented many overseas buyers from travelling to the UK.

While transaction numbers fell back in April 2021, that month also saw the highest number of offers accepted for a decade. This suggests sales volumes in May and June are likely to have been comparable to March.

What’s more, this period of strong activity has come before the complete relaxation of international travel restrictions. Once that happens, it will unleash the full force of the demand that has built up over the last year.

What is on the horizon?

Knight Frank forecasts 5% growth in property prices in 2021, as current levels of house price inflation moderate in the second half of 2021. Upward pressure on prices is expected in prime central London, with 2% price growth forecast for 2021. A 7% increase is anticipated for next year as international demand kicks in and prime central London outperforms outer London and mainstream UK markets.

Overall, the picture is of modest single-digit growth over the next five years, with ultra-low interest rates supporting the property market for much of that time.

Will travel restrictions have an effect?

This chart highlights the impact of travel restrictions, showing how price growth has diverged between the mainstream London market and prime central London over the course of the pandemic. Prices have been broadly flat in prime central London while they are growing by around 5% in Greater London. A reduction in inbound Heathrow passenger numbers of between 80% and 90% has played a key role in that. 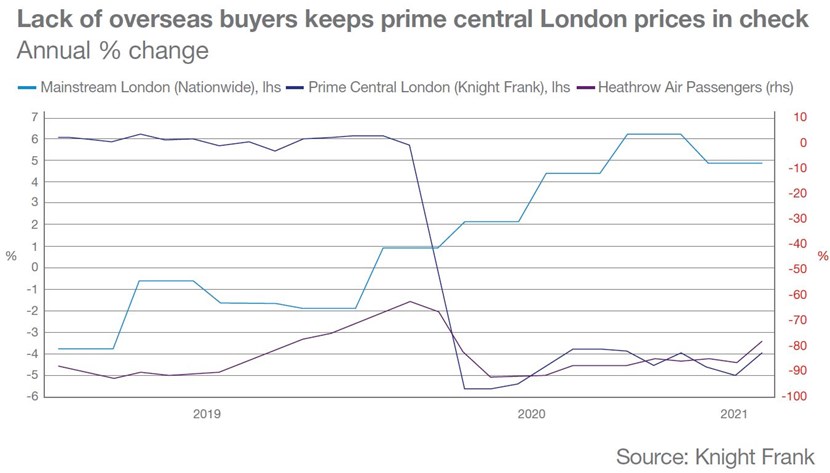 Your home may be repossessed if you do not keep up with repayments on your mortgage, or other loan secured on it.

Our mortgage advice service goes beyond simply researching the best rates for you. We have a fully-advised, telephone-based mortgage broking service that meets your needs in a flexible manner. We also specialise in buy-to-let and offset mortgages.

Helping children and grandchildren onto the property ladder

With high house prices and tough affordability checks, it can feel like it’s increasingly more difficulty for first-time-buyers to make that step onto the property ladder.

Things to consider before becoming a buy-to-let landlord

The UK population is well known for the preference of home ownership over renting. However there are millions of UK residents currently living in rented accommodation, and the properties they live in are owned by landlords.

For more information about our mortgage advice service call us on:

There is no charge for an initial consultation.