Does Biden signal a green light for green finance? 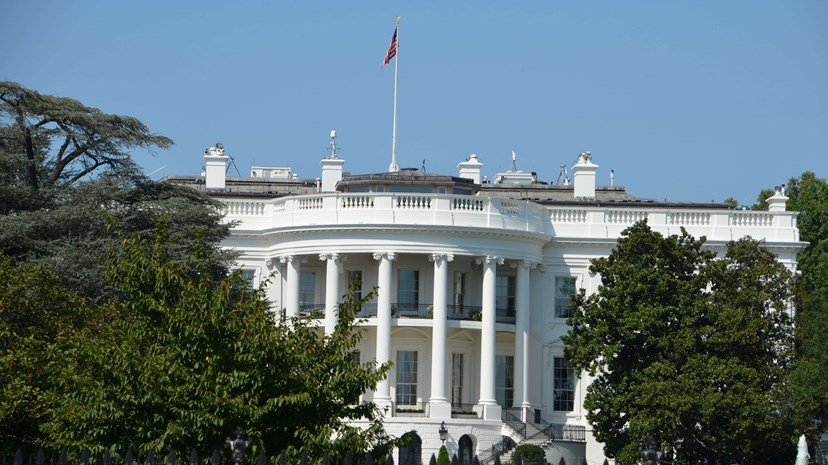 The new US president has highlighted the climate crisis as a key priority, which it is hoped will spur on sustainable investment both in America and globally

With arresting brevity, US president Joe Biden laid out America’s immediate priorities in his inauguration speech: to address “stinging inequity, systemic racism and a climate in crisis”. His mission statement marks a seachange in the United States’ approach to sustainability. For the global environmental, social and governance (ESG) community, the president could scarcely have hit a more hopeful note. After four years of Donald Trump, his message was clear: from now on you have a friend at the top.

That Biden’s predecessor was no ally of impact investors, there is little question. Trump flirted with climate denial, encouraged fossil fuel expansion and pulled the US away from global carbon commitments. And yet, in recent years, socially responsible investment has rocketed, driven by shareholder activism and boardroom resolve. The past 12 months have seen a particular shift towards the application of non-financial factors, with ESG funds outperforming the wider market.

Now, with President Biden squarely behind sustainable business, a further boom in eco-investment seems certain. Trump had little time for the green economy. Within six months of entering the White House he withdrew America from the Paris Agreement on climate change, a commitment to keep global temperatures "well below" 2C above pre-industrial levels. Domestically, he relaxed rules on greenhouse gas emissions and offshore drilling, an effort to encourage growth in the oil, gas and coal sectors. Financial regulations were also skewed against sustainable investing, analysts say.

“We saw a lot of really damaging policy that was finalised in the last couple of months. Policies aimed at making it more difficult for private sector retirement plan fiduciaries to integrate ESG factors into their investment actions,” says Heather Slavkin Corzo, head of US policy at the United Nations Principles for Responsible Investment. Since taking office, Biden has issued a string of executive orders on emissions and conservation, halting construction of the US-Canada Keystone XL pipeline, and suspending new oil and gas permits on public land. On financial regulation, Biden has been busy too.

Trump’s ESG-stymying pension fund policy looks set for the scrapheap and plans to require boardroom transparency on environmental risks are in motion. Globally, the president has been equally quick off the mark. Within hours of his inauguration, America’s commitment to the Paris Agreement had been reinstated, consistent with Biden’s pledge to achieve carbon neutrality by 2050. His attendance at this year’s pivotal COP26 climate change conference in Glasgow is all but certain and there are plans for a US-hosted precursor summit in April. Yet, domestically, the president has a fight on his hands. “The system is polarised in America. There are people who still don’t accept that climate change is real,” explains Slavkin Corzo. “I’m afraid there will be people who question the need to move the US economy in a more sustainable direction. But we can’t allow those questions to stifle progress.”

With surprise majorities in both the House of Representatives and Senate – a result of unexpected Democratic gains in Georgia last month – Biden is confident about driving progress. For ESG businesses worldwide, that’s good news. Environmental services and technology company Water Intelligence is feeling the glow of sustainable investment. Offering technological solutions to water wastage, an issue of acute environmental concern, the group has operations in the UK, America, Canada and Australia. This cross-border presence has served Water Intelligence well amid ESG’s global boom; the company’s stock price has almost doubled since March 2020, with revenues increasing three-fold in the past five years. With plans to expand deeper into the European market, and having invested heavily in water conservation research and development, bosses welcome a new US administration that puts green issues front and centre. “All parties recognise water is a big issue. And now with Biden and his team in charge, you’re raising the profile of how to integrate solutions across borders. That’s a positive, no matter which side of the political spectrum you’re on,” says Water Intelligence chairman Patrick DeSouza.

With the White House under new administration, there’s hope of some tangible changes, too. Enhancing the free movement of capital is vital, DeSouza thinks, so money can be allocated to the greatest effect. “Encouraging cross-border solutions  applies for all sorts of regulatory issues, even acquisitions. Environmental problems transcend geographies and one needs to apply capital to grow businesses with that mindset.” On a par with unfettered capital flows, the easy movement of personnel is key to ESG business. While Trump railed against the influx of foreign talent, “America first” being his favoured refrain, Biden recognises the economic value of migration. On this he has the backing of green industry leaders, experts believe. “National sovereignty is obviously never going to go away but, at the same time, the freer movement of particularly talented people between countries: the corporate pressure for that is just ferocious,” says Columbia University’s professor of public affairs Steven Cohen.

Having access to the best global talent taps into another Biden priority: social justice   Consistent with ESG principles, the president is determined to address wealth inequality and forge a more even playing field. For sustainable business, this can only be a good thing, says Cohen. “We’re in a global economy, a brain-based economy. And the smartest, most talented people want diversity. They want to be in that kind of environment, they care about those issues,” he adds. It won’t all be inflow, though. In the sustainability arena, Biden’s America will have one major “soft” export: influence. This is true of government policy, as there is hope America’s recommitment to carbon reduction will spur laggard states, and at a fund level. When, for instance, the White House moves to make pension plans more ESG friendly, asset managers “will likely ask their investments in other countries to fall into line”, says Arne Staal, head of product and research at FTSE Russell. Although this sort of soft power will be less evident in the UK and Europe, where ESG rules are already advanced, there is a belief that, with Biden, a much-needed framework of international standards is coming. “Standards regulations are fractured globally, which is holding back progress in the sustainability field,” says Staal. “We need a common understanding of data, a common understanding of the truth of how corporate firms are, or are not, contributing to the green economy. The new administration will really accelerate that global ambition." 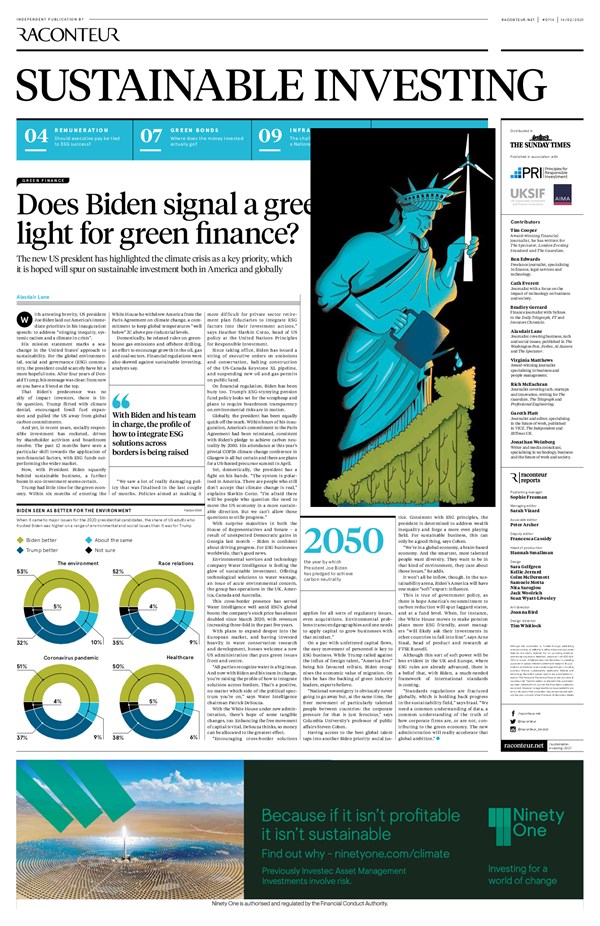