The gender pay gap - how employers can help

It must be disheartening to the women at the centre of the 1968 Ford Dagenham machinists strike, who led the way to the Equal Pay Act 1970, that true gender parity in economic participation and opportunity was estimated to still be more than 257 years away, according to a 2020 report.

This should be disheartening to all of society. Parity of pay and opportunity is not just good for women, it’s good for everyone.  Drawing on the talents of the total workforce, not just a part of it, creates the diversity of thinking and innovation vital to tackling domestic and global challenges. And, let’s face it, closing the gender pay gap is the right thing to do.

But over 50 years after the Equal Pay Act, women in the UK still earn just 81p of every pound earned by men, and it’s even worse in many other countries.

The sums add up. The OECD has suggested that releasing the untapped potential of women could increase the global economy by 10% by 2030. In the UK alone, Britain sacrifices about £123bn a year because of lost productivity associated with unequal compensation.

“There is an accompanying economic imperative for including women more fully into society and the workplace. Female talent remains one of the most under-utilised business resources, either squandered through lack of progression or untapped from the onset.” World Economic Forum: The Future of Jobs Report 2016

The business case for change has been demonstrated.

Why is the gender pay gap still a thing?

Inequality has been baked into political, societal and economic structures for millennia but, despite recognition of the problem and attempts to solve it, the gender pay gap remains.

One of the key issues is that women are more likely to sacrifice the opportunity for earnings, progression and promotion for the sake of family, and this means they lose out, chiefly because of:

The penalty of being a mother is reduced pay and opportunity. Being a father? Not so much. Society’s current take on motherhood keeps the gender pay gap wide open, because:

Another factor is the still-divided labour market, with women making up 75% of the part-time labour force, in lower skilled, lower paid roles. In addition, the COVID-19 pandemic has hit women hard, with part-time jobs falling by 70% in the first 11 weeks of the pandemic in the UK, as well as vital childcare support withdrawn as schools closed.

The burden of caring

Women also take on the responsibility for and burden of caring, not just for children, but for parents as they become more frail. The responsibility of care falls on daughters and daughters-in-law, rather than sons. Unpaid labour of care and domestic work remains feminised, and is a huge uncosted and unrecognised support for economies globally.

The financial implications for women

The business case for closing the gender pay gap has been made, but what’s not made as clear is the impact on women’s finances and economic wellbeing. The consequences of the gender pay gap get worse as women get older, largely as women have been unable to build up assets for themselves.

For instance, our research on savings by gender found that men have seen their average savings pot rise 8% from £36k to £39k in three years, while women have seen their savings plummet from a £26k average to just £22k.  Women’s retirement savings still lag significantly behind men’s, at £73k compared to £162k. 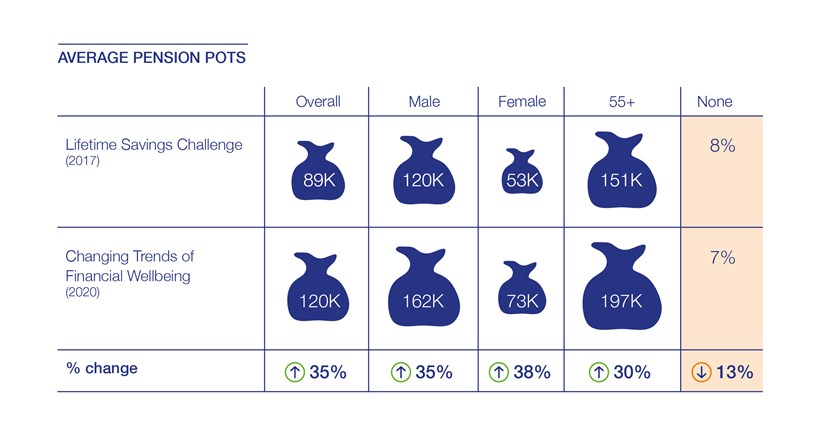 Closing the gender gap: What you can do about it

Every organisation can do its bit to close the gender gap. Every improvement is a nudge in the right direction. Here’s where to start:

UK law is clear on equal pay. Make sure that your organisation is meeting or exceeding the requirements.

3. Be transparent about salary

Be open and transparent about salary and benefits. Fawcett Society data suggests that only 24% of workplaces report that salaries are discussed openly. Secrecy about salaries allows discrimination to flourish. Transparency can include publishing salary ranges upfront and defining a set salary structure for job titles.  Bring salaries and benefits into the open.

4. De-bias your recruitment and promotion interviews

Use structured, rather than unstructured, interviews in order to reduce the chance of unconscious bias influencing the outcome. Structured interviews use set questions asked in the same predetermined order and answers graded using standardised criteria. Skills-based assessment tasks during recruitment are likely to be fairer rather than interview alone.

Don’t make it a policy to ask candidates about their salary history, as this is immaterial to the role they’re seeking.

You may offer a range of family-friendly policies and benefits, but how far does your tacit organisational culture allow your people to use them freely? For instance, women are significantly underrepresented in STEM and, as one study found,  this is fuelled by family-unfriendly practices such as long working hours as a yardstick for performance.  Review your tacit organisational culture to check how far it supports working mothers, as well as fathers who want to share caring responsibilities more equally or become the main caregiver.

Women’s participation at junior, senior and leadership levels are different across industries and sectors, but there’s a general narrowing of opportunities as women become more senior. How are women placed in your organisational succession planning? Find out where the gaps are in your female talent pipeline.

Closing the gender pay gap may seem a huge undertaking, but it’s one that every employer has a responsibility to tackle.

Seven things to consider when talking to employees about phased retirement

Could you retain staff longer by helping them to retire earlier?